At the funeral of Sinn Fein Councilor and Provisional IRA, Commander, Jim Lynagh in May, 1987, Gerry Adams told those of us gathered;

“Anyone who does business with the British, the Freestate establishment or The SDLP are fools because they have all sold out on the Irish people”. 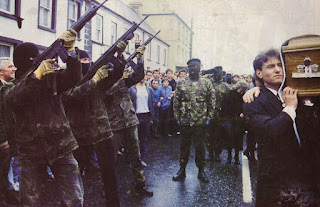 Soon it became clear that Gerry Adams, was in fact talking to all of the above, while his oration at the graveside of Jim Lynagh was designed to keep Provisional IRA Chief of Staff, Kevin McKenna on board the Adams project.

I personally began to work with Social Democratic and Labour Party (SDLP) Leader John Hume from 1992, and John was clear that he had been talking to Adams by means of intermediaries and face to face from mid-1980s. With latter talks, later described as the Hume/Adams Initiative lasting approximately eight-months. 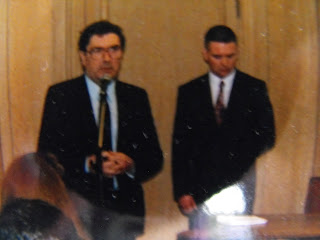 The Hume/Adams Initiative only became widely known in the public domain in April 1993 and when revealed, the talks were severely criticised by other parties and from within the SDLP.

My personal view was and remains that someone had to talk if the wholesale murder of our citizens was to end. However, Sinn Fein/PIRA had been brought to the talks table from a position of weakness and had to be treated as such, an endless shopping list of concessions did not have to be entertained.

In 1993, I found myself in a very interesting position, I was working quietly with John Hume and I was in a separate role, engaged as a Runner between my cousin PIRA Chief of Staff, Kevin McKenna and Martin McGuinness who was Head of PIRA Northern Command.

I was appointed Runner by Kevin McKenna as he trusted me and I also had a genuine reason for being in Monaghan, where Kevin was based, and Derry where Martin McGuinness was based, each week.

I could write a book on this period; however, I have over the years learned to compartmentalise epochs of history or I would be writing morning to night for the rest of my life.

In April 1993, I was a Runner between Kevin McKenna and Martin McGuinness, and I was working quietly with John Hume. John Hume and Kevin McKenna had one key trait in common, neither trusted McGuinness. Kevin McKenna thought that McGuinness was simply talking to PIRA Northern Command, and that ‘peace talks’ were the preserve of Hume/Adams.

John Hume was of the opinion that McGuinness was actually talking to MI6 and that McGuinness would do a Dirty-Deal with MI6 that would abandon the Catholic community in Northern Ireland to the coercive control of Sinn Fein/PIRA. John was correct. 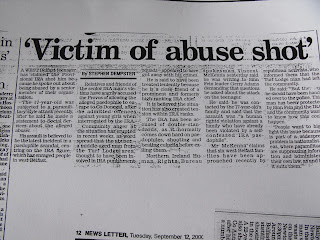 Kevin McKenna was weary of McGuinness and believed McGuinness would allow decommissioning to be offered to the British in exchange for minimal concessions such as release of prisoners, de-militarisation and so forth, and no substantive move would be made on Irish Unity or "Those Orange Bastards"..

In April 1993, I meet with McGuinness at a Safe-house on the Culmore Road in Derry, I was simply delivering a Communication from Kevin McKenna, this was a Comm, message written on cigarette paper and sealed in cling-film.

McGuinness was never happy simply taking the Comm from me and going about his business, he always wanted to chat and find out how Kevin McKenna was dealing with the loss of so many men under his Command and so forth. At one point during a meeting McGuinness went to the bathroom, and left his jacket hanging on the back of a chair.

When McGuinnes went to the bathroom I searched his pockets to establish if he was wired for sound, if he was recording our conversation, instead I found the communication below and I placed it in my pocket. 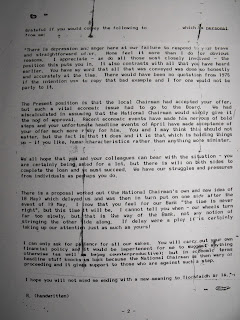 It transpired that the document that I removed from McGuinness’s pocket was a Communication from MI6 Officer Michael Oatley to McGuinness only a short time before our meeting.

The communication had been hand-written by Oatley and then typed up by another Officer, Robert, so that Robert could remove Oatley’s name from the bottom of the Communication and McGuinness’s from the top.

When I had worked out the significance of the Communication from Oatley to McGuinness, I decided to leak it to trusted journalists. This leaking would have a two-fold impact, it would make the public aware of the duplicity of the British Government who were denying that they were talking to Sinn Fein/PIRA, and secondly it would ensure that future talks would be more transparent.

When I leaked the Communication between Oatley and McGuinness, Sinn Fein/PIRA were in a spin, Gerry Adams had told Kevin McKenna that the there were only exploratory talks between himself and Hume, there was no acknowledgement of contacts between McGuinness and MI6 at that time.

Eventually, Sinn Fein/PIRA put McGuinness forward for an MI6 inspired television documentary where McGuinness explained away his contact with MI6 as part of the talks process, this was a comprehensive lie, McGuinness was in fact an MI6 Agent, an Informer, however, Adams needed to keep McGuinness on board or he could have lost Derry to the whispered ‘dissent’ in south Armagh/East Tyrone in 1993.

The Communication that I leaked was denied by Sinn Fein/PIRA, however, many years later they would place a copy/version of the Communication on their website and claim it was part of a sanctioned talks process, it was not. They do not have the original, I have, and it is signed with R.

The British were absolutely certain both McGuinness and Adams had offered ‘Decommissioning’ and the effective surrender of The Provisional IRA in return for minimal concessions.

On the 10th of October, 1993, Sir Patrick Mayhew spoke to RTE Radio and made it absolutely clear that Sinn Fein/PIRA had offered ‘Decommissioning’ and Provisional IRA surrender so that they could engage in multi-party talks.

Gerry Adams felt slighted by Sir Patrick Mayhew’s RTE Radio interview, that interview reaching the ears of many loyal followers that Adams had told that there would be no surrender of PIRA weapons.

As a result of Sir Patrick’s interview on RTE 10th October, 1993, Adams was being told that there was serious opposition to his plans from areas such as south Armagh and East Tyrone.

The Shankill Bomb was a suicide mission, Thomas Begley was sacrificed to keep south Armagh and East Tyrone on board the Adams project. The Shankill Bomb sent a clear message to the British Government;

The Shankill Bomb convinced Kevin McKenna that Adams had not sold-out, and in a rare interview, Kevin McKenna told Eamon Mallie, Downtown Radio, 1994;

“As long as the boys with the balaclavas are at the table, I am happy enough”

This was Kevin McKenna making it clear in the public domain that The Provisional IRA, in the persons of Gerry Adams and Martin McGuinness were at the table.

PIRA member, Thomas Begley died and nine others, all Protestant civilians, were murdered when the PIRA bomb he was carrying exploded ‘prematurely’ at Frizzell's fish shop on the Shankill Road on October 23rd, 1993.

Begley and a second bomber, Shankill Butcher, Sean Kelly, wearing white coats and posing as delivery drivers, carried the bomb into the shop.

Begley (22) was later buried with full IRA honours in the republican plot in Milltown Cemetery, and his coffin was carried by Sinn Fein President Gerry Adams. Gerry Adams had also given full IRA honours to his Father, Gerry Adams Snr who was a prolific Child Rapist, so Honour means very little within Sinn Fein/PIRA where serial killers and serial Child Rapists are given equal honours with the likes of Bobby Sands. 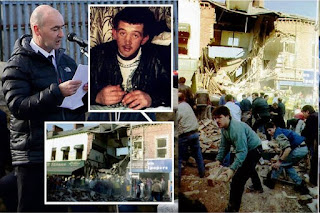 While the Shankill Bomb will remain etched in the minds of all decent human beings, and The Shankill Massacre has been well documented, the fact remains that the Sinn Fein/PIRA spin doctors and their friends in high places have left confusion rather than clarity.

In 1993, The UVF and The UDA had out-gunned The PIRA for the first time since 1969 when The PIRA were founded. It is not a conspiracy theory to believe that the loyalist groupings were in concert with aspects of the security services, and this focused campaign was having a significant impact on Sinn Fein/PIRA’s support base.

In East Tyrone, the ancestral home of militant ‘republicanism’ there was talk of a split in 1993, that split had been rumored for years, but had been side-lined as 28 PIRA activists were shot dead by The SAS between 1987-92.

Recruitment to The PIRA was not an issue, however, the softer edges of Sinn Fein/PIRA were getting nervous and did not want to be seen publicly involved with Sinn Fein/PIRA particularly at election time, this was a major problem.

The Sinn Fein/PIRA Leadership in Belfast and Derry were trying desperately to hold the organisation together, and they knew that any split in the border region would derail the political ambitions of Gerry Adams. The key consideration for Adams and McGuinness was to keep the organisation together at any cost, including sacrificing the lives of the innocent.

The straw that broke the camels back came in April 1993 when secret talks between McGuinness and MI6 were exposed, anyone who remembers that period will remember Adams and McGuinness scrambling like rats to cover their tracks. McGuinness participated in an MI6/BBC crafted documentary to try and explain away a secret document that had been leaked to certain media. Adams and the Belfast leadership weighed in behind McGuinness to support his version of events.

In fact, it was all a lie, McGuinness was in fact an MI6 Agent and even his Handler MI6 Officer Michael Oatley tried to offer support to the Sinn Fein/PIRA narrative. However, PIRA Chief of Staff, Kevin McKenna, PIRA Quarter-Master, Michael McKevitt and PIRA Bagman, Thomas ‘Slab’ Murphy had known nothing about the McGuinness and MI6 contacts. It could be the case that Adams did not know the full extent of McGuinness’s dealings with MI6.

The exposure of the secret contacts were initially denied by all parties and then gradually as they got their various narratives together, they told their version of events. However, East Tyrone PIRA and other activists around the country were not happy, something had to be done to convince these unsettled PIRA members that Belfast PIRA had not sold out.

The political cover-story for The Shankill Bomb would be that The PIRA were targeting Johnny Adair, this was a lie, Johnny Adair could have been taken out any time, The PIRA were receiving, Grade A, information about Johnny Adair from people very closely associated with him.

When The PIRA murdered 10 Protestants at Kingsmill, they used a cover-name, as it was not politically expedient, particularly for the American audience to be engaged in a purely sectarian conflict.

When The PIRA bombed Enniskillen they said they were targeting British military, total nonsense. Enniskillen was a sectarian kill, at a time when Sinn Fein/PIRA needed a blood sacrifice to quench the thirst of their membership and followers, after Loughgall.

Johnny Adair was used as the political cover story for The Shankill Bomb, it was a lie, it was a deliberate sectarian kill to quench the thirst of East Tyrone PIRA as well as PIRA Leaders such as Kevin McKenna, Slab Murphy and Michael McKevitt.

Sinn Fein/PIRA said the bomb exploded ‘prematurely’, where did that information come from? Who can independently prove that the bomb went off before its time? Perhaps MI6 or one of their Puppets. This was a carefully spun web of lies.

The Shankill Bomb had the impact required within Sinn Fein/PIRA, it convinced The PIRA in East Tyrone that the leadership were not selling out and Kevin McKenna was happy with a good kill that was in keeping with the policy of Ethnic Cleansing. 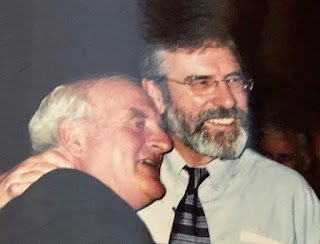 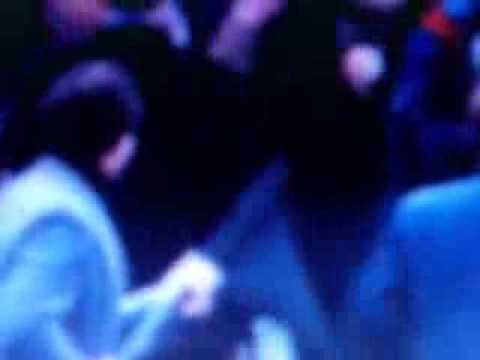